So we face a choice every moment of every day: We can fill one another’s buckets, or we can dip from them. It’s an important choice – One that profoundly influences our relationships, productivity, health, and happiness. – ‘Grandfather of positive psychology’ Donald Clifton and Tom Rath

In 1938, Harvard University initiated a study of 268 students. The researchers leading the study, later known as the Grant study, interviewed the individuals every few years to see how their lives and their careers would develop. At the time, researchers were most interested in studying men’s physiognomy – did these men’s “masculine” body types predict future success? Were the men who appeared more masculine more likely to achieve career and personal success?

As it turned out body type did not matter at all. But, something else did. The men who grew up in homes with warm parents and loving relationships were more likely to reach higher ranks in the military, while the men who lived in colder homes were much more likely to remain as privates throughout the course of World War II. Body type was not the only useless predictor – social class, birth order, and political affiliation were each ineffective as well. No, a warm childhood trumped them all.

According to the director of the study, George Vaillant, “It was the capacity for intimate relationships that predicted flourishing in all aspects of these men’s lives.” Some of the men in the Grant study who had weak relationships and inhibited emotional connections would initially experience career and marital unhappiness – even those highly educated men with degrees from Harvard – but would later turn their lives and careers around once they became more apt at recognizing and expressing their emotion.

Contrary to what you were likely taught, the core of professional relationships is in building these emotional connections with others. Those who are able to do so effectively not only achieve better results in their own careers, but they also build greater trust in others, thus creating a more powerful network that they can use to pursue new, more engaging career opportunities. 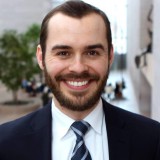 Andre is CEO of Career Mavin and author of Career Talk: Everything You Need to Know to Have a Great Career (available at www.careermavin.com). Prior to starting Career Mavin, Andre led the modernization of the U.S. government’s flagship career program, [email protected], which provides online and in-person career training to hundreds of thousands of doctors, lawyers, and professionals across the country every year. You can email him at andre at careermavin.com.