One of the biggest misconceptions going around about social media sites like Twitter, Facebook and Instagram is that they are an “unprofessional” waste of time. The more serious, older and less tech-savvy bosses in the business world tell themselves and their employees they have no use for such sites.

If you have your ear to the ground for the latest in business and social media news, you of course know Virgin Mobile is writing lists for BuzzFeed in a bid to seem “hip” to potential customers. McDonalds and Taco Bell are engaged in a social media feud. Clearly, social media is a big business for bigger businesses. Even CEOs for companies like Walmart and Target keep blogs and other social media accounts in order to establish visibility and connectedness to their customers.

You know instinctively that your boss could benefit from branding his or herself through social media. It’s just a matter of finding ways to make your case.

Here are a few helpful ways to help convince your bosses that they should give social media branding some serious thought.

A Direct Method Connecting With Your Target Audience

Social media sites feature hundreds of millions of users from around the world, all of whom represent a potential customer to one company or another.

If your company is responsible for refurbished equipment, it’s a good idea to have high ranking company members connected to the organization via Facebook, LinkedIn, etc. who can be reached for further information about the company. This includes customers who may have questions about whether or not equipment is certified and how they can find out more information about products.

A number of online customers are more apt to engage companies that are highly visible and whom use social media sites as a form of customer service. Bosses should be informed that if customers feel that they are respected and heard, they are more likely to stay loyal. One of the best ways today of fostering loyalty is continuous interaction on social media sites.

Behind every great company is a great CEO. We know this because often, the names of these CEOs are synonymous with the companies they’ve created. Steve Jobs was the man behind Apple. John Schnatter is readily associated with Papa John’s and there would be no Walmart without Sam Walton. Often, it’s the names behind the companies that grant the lasting impression as to what a company is really about. When the people at the top make it a point to be highly visible and engaging on social media sites, it gives the impression to potential customers that the company they own and work for is the same. Rather than seeing a company as a soulless corporate machine, there are human faces and unique personalities that can readily be associated with the organization. By branding themselves, these people are, in their own way, validating the company’s brand.

The old-fashioned attitude towards social media was that it was unprofessional and employees should stay away. There was a sense that workers were not allowed to express their individual selves and instead, dedicated their time and energy as “cogs” in a machine.

Now that more CEOs are making their presence felt on the internet and social media, their employees are following suit. Employees often connect on social media and in their own way, promote their company and its happenings. The more personable and engaging a company is online, the more it allows employees to freely express support and pride in their company on social media.

Though getting on social media and branding is the goal, it’s also fair to consider that ideas which seem good on paper, can be disastrous once on the internet. This includes tasteless or ill-timed “jokes” and advertisements. Posts that are politically-incorrect or negatively reflected on the individual and company must also be avoided. There are people who found themselves without a job because what they said on social media went viral. It’s important to be sensible when it comes to branding yourself on the internet.

Social media works well for bosses who are not afraid to show off their personalities and truly engage the public. It can help draw a legion of loyal followers and customers, which is why more bosses should consider making the most of various social media websites.

How do your bosses engage in social media branding? Or, what would you like to see them do differently? Tell us in the comments section below! 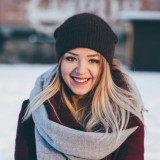 Courtney is a blogger with a passion for all things internet and social media related! Read more from her on her own blog, talkviral.com.