Over the past few weeks, I have attempted to shed light on Dale Partridge’s book People Over Profit through a different lens. If you have missed any post, you can read People Matter, 10 Ways To Be A Person Over Profit, and Purpose Over Profit.

I am a high school teacher and like feedback during class. In that spirit, let’s imagine today that we are in an interactive virtual class. Select one of your favorite movies and focus on the main character (protagonist/leader), or the character in the film who stood out the most to you. I am a teacher and love the film Lean On Me starring Morgan Freeman, who plays the character of Principal Joe Clark. In the film, Freeman plays a no-nonsense high school principal who is determined to turn his school around. As an example of how to apply film analysis to real life, I have answered the following questions based on the film.

Today’s assignment: Answer the following questions based on your view of the character. Let’s go!

Question 1: What do you believe were the fundamental elements of character, the values or code of ethics the leader in your film exemplified?

Question 2-A: Select one dilemma or issue your protagonist/leader dealt with.

Mr. Clark decided to chain lock the school doors after there was intrusion at Eastside High School in Paterson, New Jersey. Unfortunately, the movie is a bit vague as to how the intruder got inside the school. Murmurs from the students in the cafeteria suggest it was with another student’s aid. After a brief scuffle with the student, the intruder was reprimanded and taken into custody by school security. Upon this revelation, Clark instructed security to chain lock all school doors to deter outside violence from entering the school, and in order to encourage a safe and orderly environment.

Question 2-A: How did his values or code of ethics help or hinder the decision-making process in the example you selected?

Clark’s values were hindered in this decision-making process. Lack of funding was part of the sum of the factors as to why he made the decision. The lack of funding combined with his impatience were a recipe for disaster. As much as we educators may desire to impact student lives, we must stop at practices that are illegal. Regardless of how noble and well-intended, flouting the law cannot tolerated.

Question 3: What course of action as a leader would YOU and your core values have taken in this particular case?

Leave a comment below with your favorite film, leader, and answers to the above questions. 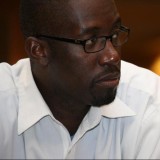