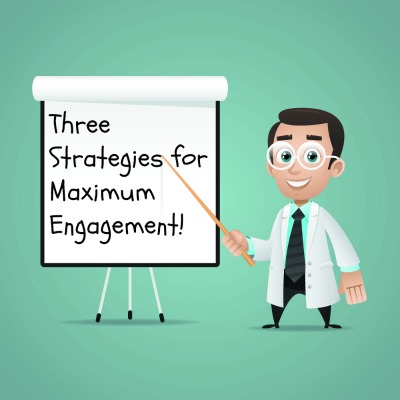 Years ago, I served as the Assistant Children’s Pastor at a large church in San Diego. The children’s pastor I worked with was a brilliant communicator who was able to keep his audience on the edge of their seat every time he spoke. The topic didn’t matter; this master communicator knew how to make the most mundane subjects seem thrilling. When you are the children’s pastor in a large church, being able to hold the attention of a room full of kids is incredibly valuable, and knowing how to make a subject matter engaging is equally as essential for everyone with a message worth sharing. Since you’re reading a blog about leadership in life, it’s likely that you will find these lessons from a master communicator and a bottle of Visine immensely valuable.

How a bottle of Visine became the most interesting thing in the room.

It started as a children’s church service just like any other. The kids checked-in and watched a short video while they waited for the service to start. Next, our worship leader took the stage. We had about seventy kids in attendance on this particular evening, and they all participated as usual.

But then, when worship came to an end, something out of the ordinary occurred. Our children’s Pastor walked on stage wearing sunglasses. Since our service was held indoors, this was noticeably out of place. The Pastor explained that he had contracted conjunctivitis, also known as pink-eye. He told how earlier in the week his left eye began to itch, eventually becoming goopy and red. He let the kids know that they had nothing to fear as it was no longer contagious and then asked the children, “Would you like to see it?” A resounding “Yes!” filled the room. This man had done it again. Our children’s pastor was talking about pink-eye and a room full of seventy children was hanging on to every word. But, it didn’t stop there. After taking off his sunglasses, Pastor continued sharing his pink-eye adventures. He informed the children about how pink-eye is contacted and treated. He talked about how the doctor had prescribed that a drop of Visine be placed in the infected eye every few hours. He spoke about initially being afraid of placing these drops into his open eye, and how he soon learned that it didn’t hurt. “Except” he said, “for the time I tried to put a drop in while driving and unintentionally jammed the bottle into my eye”.

Pastor then looked at his watch and stated, “It’s time for me to put in a drop right now, would you like to watch?”. This question received an even louder “Yes!”. Pastor proceeded to pull a tiny bottle of Visine out of his pocket. He unscrewed the lid, suspended the bottle above his left eye, and as he did this, every single child in the room stood to their feet to watch. I couldn’t believe it. It was a bottle of Visine and pink-eye, not a creative object lesson, not a magic trick, or even a really good story. Seventy children stood to their feet without being prompted, to watch their pastor put a drop of Visine in his eye–now that is powerful communication! Over ten years have passed and this event continues to stand out in my mind. What is it that makes a master communicator so engaging? While I still don’t have everything figured out, here are three tools that I have found incredibly helpful for creating maximum engagement. 1) Turn your teaching into a story.

Stories engage us and connect to our hearts in a way that nothing else does. The good news is that there is a story behind almost everything; the trick is to find it, and tell the story well. For most people, contracting pink-eye would be nothing more than an annoying set of facts. In the hands of a master communicator it becomes a winning tale to tell. Bloggers, authors, parents, and leaders all have an important message to share. There is a reason for getting the message out and this reason is often referred to as one’s “why”.

It’s likely that you’ve been encouraged to find your “why” before. What I would exhort you to do is to find the story behind your “why.” For example, I blog and write books “in order to help overwhelmed Christ-followers apply Biblical and psychological principles in such a way that they can rise above challenges and press forward to live, love, and lead well”. This is my “why”. It’s the reason I do what I do.

However, there is much more to my “why” than this. The story behind my “why” goes back nearly ten years to a time when I faced an overwhelming flood of crisis that all hit at once. Simply stated, the story behind my why is that I know what it’s like to hurt, and I don’t want others to go though the same kind of challenges that I did. While I won’t go into all of the details in this post, I will let you know that when I want to engage my audience in my “why”, I don’t begin by stating facts, but by telling my story, because while facts activate our listener’s minds, stories captivate their hearts.

2) Instead of always making yourself the hero, share fears and failures, too.

One pitfall of sharing our story is that it’s tempting to always make ourselves the hero. In a previous post, I have disclosed that this is a personal vice of mine that I am striving to overcome it. Resisting the temptation to sanitize our story can be difficult, but it’s worth it because people connect best to other imperfect people.

This is in no way to suggest that we can’t share our successes, too. Instead, it’s a reminder that if we only share our successes, we will be missing out on valuable connection opportunities. Our fears and failures humanize us and make us more relatable. When this pastor spoke of his fears, he shared a part of himself that children could identify with, and this created engagement.

I love reading biographies, and I especially enjoy memoirs. Memoirs are similar to biographies, except they have an added twist. While Biographies are facts driven and focus on events, memoirs hone in on the memories of the story teller. They create intimacy or “in-to-me-see” by allowing others to peer into the inner world of the story teller. Of course, this is only one way of dramatizing the stories that we tell. Other strategies include:

Turning teachings into a story, sharing fears and failures, and dramatizing events are three important skills used by master teachers to connect with their audience. These tools are so powerful that they resulted in an entire room of children listening intently to a story about Visine and pink eye, and if a bottle of Visine can get that kind of engagement, just imagine what these tools can do when you connect them to the valuable messages that you have.

Now that I’ve shared three techniques of a master teacher, I’d love to hear from you. What other tools would you add to this list? Have you used any of these techniques when you have shared your message and if so, what were the results? Finally, what’s the bigger story behind your “why” that drives you to share your message with others?